Canada is choosing its next long-term training partner for the Royal Canadian Air Force (RCAF). Future Aircrew Training (FAcT) is an ambitious, next-generation program combining all phases of RCAF pilot and aircrew training and in-service support. It’s a significant Department of National Defence (DND) contract that is expected to be awarded in 2023.

SkyAlyne – one of four qualified suppliers competing for FAcT – is a partnership between Canadian defence and aerospace leaders KF Aerospace (based in Kelowna, BC) and CAE (based in Montreal, QC).

Below, two of Canada’s leading defence executives, Tracy Medve, President of KF Aerospace and Board Chair of SkyAlyne, and France Hébert, Vice President and General Manager, CAE Defence and Security Canada, and President of SkyAlyne, elaborate.

Q: FAcT has drawn some intense competition to win this contract. What sets SkyAlyne apart?

Hébert: Proven expertise, training continuity and deep roots in Canada! SkyAlyne is a partnership between two Canadian-founded companies, both experts in military pilot training and in-service support. Canada’s leadership in military aircrew training has been identified by the Government as a key industrial capability and is recognized by our allies. Choosing SkyAlyne is an opportunity for Canada to keep RCAF aircrew training in Canadian hands — we’re the only fully Canadian bidder — and free from external disruptions that could affect this critical military capability.

Medve: And then, there are the economic benefits to Canada of keeping this large and crucial contract in Canadian hands! In fact, SkyAlyne is the only solution for the FAcT Program that will keep all economic benefits in Canada, including the potential to export our expertise to allies and partners in the future. And the benefits will cascade across the country thanks to the impressive team of Canadian subcontractors we’ve assembled. The SkyAlyne team includes Canadian businesses that operate in every region of Canada. Collectively, these companies employ more than 14,000 Canadians, from coast to coast to coast. It’s pretty clear that choosing SkyAlyne for FAcT would maximize the economic growth opportunities for Canadian workers and communities, including Indigenous communities, for years to come.

Q: You mention proven expertise. Can you elaborate?

Medve: Both our companies are the incumbent contracted training providers for the RCAF. The Contracted Flying Training Support (CFTS) program in Southport, MB, has been managed by KF Aerospace since 2005, and the NATO Flying Training in Canada (NFTC) program in Moose Jaw, SK and Cold Lake, AB, is managed by CAE. Today, all RCAF pilots are trained in phases between these two programs.

By forming SkyAlyne, we’ve brought all current contracted military pilot training in Canada under one umbrella. We’re ready to advance and implement the FAcT program immediately, minimizing the transition risk and ensuring there will be no interruption of service.

Hébert: CAE is the worldwide leader in aircrew training, simulation and in-service support. Typically we train more than 220,000 pilots and aircrew around the world each year across military and civil aviation. KF Aerospace is Canada’s largest commercial aviation maintenance, repair and overhaul (MRO). Both of our companies have long histories working with the RCAF and supporting Canada’s military.

Q: SkyAlyne is making a strong pitch for FAcT. Why is this so important to you?

Hébert: Ha! Is it so obvious? Both our companies’ histories are intertwined with Canada’s military. It’s in our DNA. We’ve been supporting Canada’s military for decades. We intend to use our innovative, world-leading training expertise and to continue honouring the RCAF’s proud heritage as we work to ensure that Canadian military pilots and aircrew remain among the best in the world.

Medve: This is personal for us. Canada is our home. This is a chance for us to draw on our vast experience as two successful Canadian companies and create something new and unique – a Canadian defence company that honours our proud past but that, as France says, has the capabilities and the knowledge to accelerate military pilot training in Canada into the future. And with the many economic and strategic benefits our selection for FAcT would bring, it’s a win-win for Canada.

This sponsored article appeared in the November 18 Defence Policy Briefing of the Hill Times (page 23). 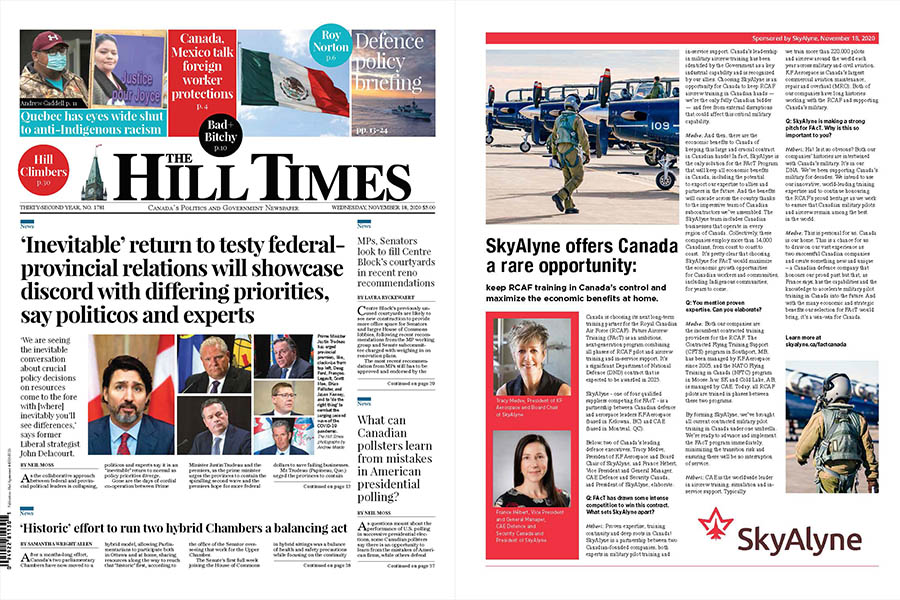